Magpie and the Dandelion 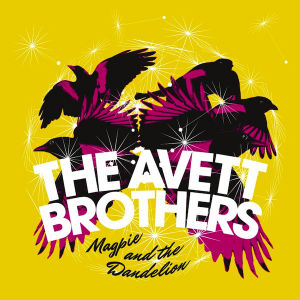 Magpie and the Dandelion is the eighth studio album by folk rock group The Avett Brothers, released on October 15, 2013. The album was produced by Rick Rubin who produced their previous two full-length studio albums, 2009’s I and Love and You and 2012’s The Carpenter. The band first announced they were working on the album in a June 12, 2013 interview and that the songs were all recorded during The Carpenter’s recording sessions. The album’s title and release date, along with the first single from the album “Another is Waiting,” were released on NPR’s All Songs Considered on August 8, 2013. All eleven songs became available for streaming on October 9, 2013 on NPR’s First Listen.

The album was recorded during the same recording sessions as The Carpenter and in an open letter to fans published on August 8 the band says the album conveys a feeling on “youthful wonder”. The album received generally favorable praise from critics and reached #5 on the U.S. Billboard 200 chart during its first week.